It's been a while since my last blog post, it was the week I was sent home from work due to Covid-19...127 days ago and counting.

Although I planned to spend that time practicing various software and disciplines I decided that with such a long time off I could probably learn Blender once and for all (at least a good working knowledge), something I have put off for the better part of a decade. For the most part I rely on free tutorials, youtube etc, but I knew with such complicated software it was probably for the best I took a good paid course to get over the hump faster.

A year ago I had taken the HeavyPoly Blender Container ship course over the period of 5 days. It was an excellent course but due to my own reasons for not carrying on with Blender I had forgotten everything pretty much straight away.

I went looking to see if he had any updated courses and was pleased to see he offered a 7 week course on Blender.

The course was split into 7, week long modules. We would have an online class once per week for 2-3 hours and then take a homework assignment. The class would have a Skype group to talk to each other and the tutor over the week.We also use a scripted version of the Blender interface called HeavyPolyConfig.UI. This changes a lot of the keyboard shortcuts and adds in many more radial menus to make the building process a lot faster and more intuitive. 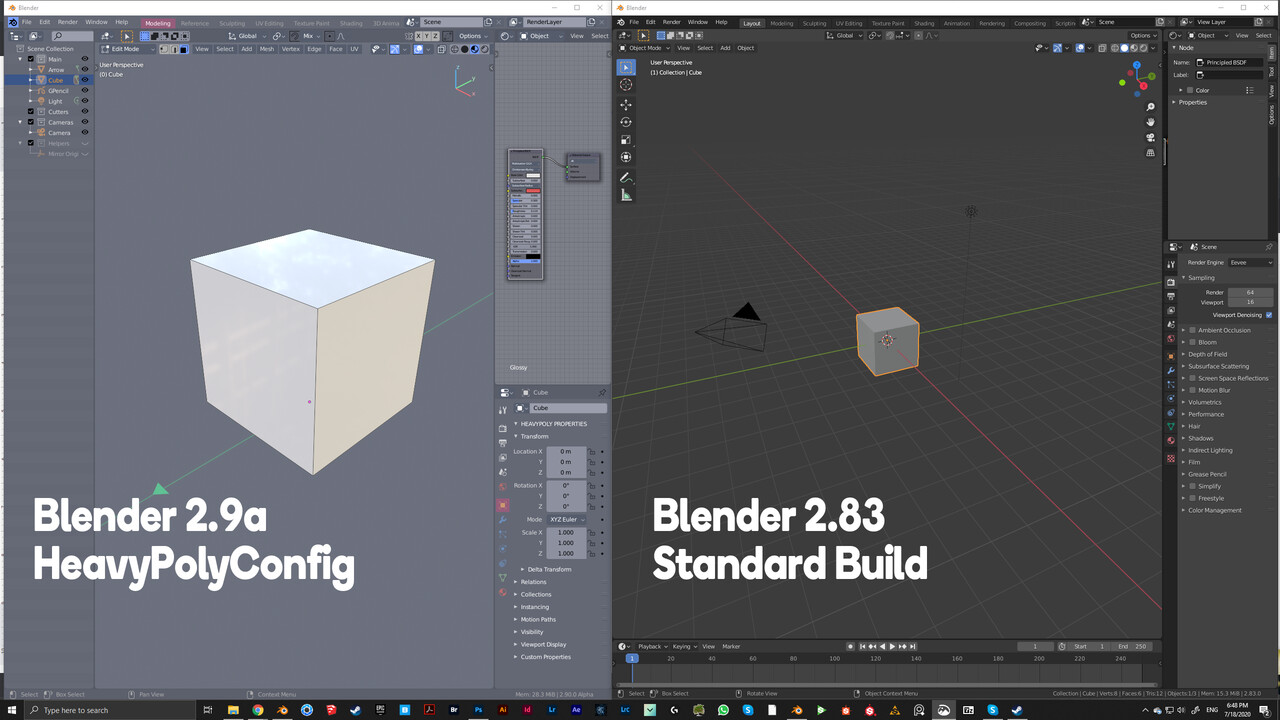 The first week's project was intended for us to get comfortable with Blender’s UI and create a low poly night alley scene. Using only basic lighting and materials. We were given the artwork of WANEELLA the pixel artist to study and base a piece from. I chose this fantastic artwork for my base. 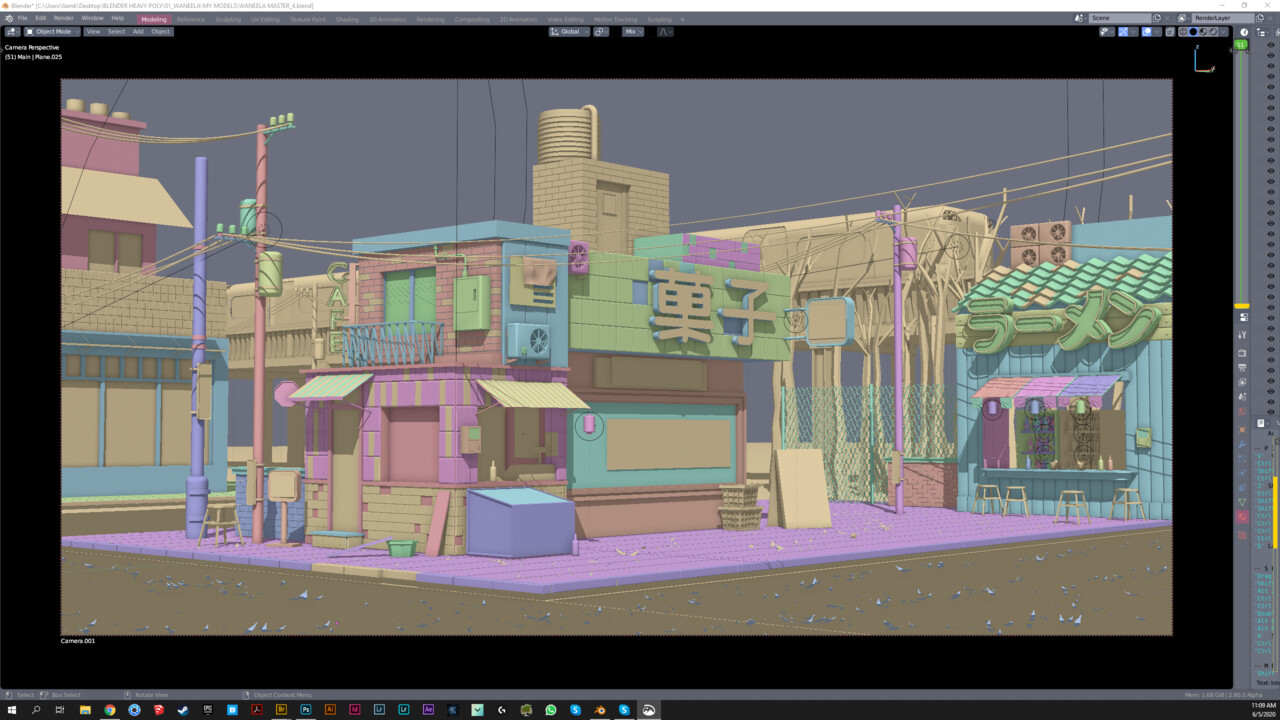 I decided to add in some subtle animation as a nod to the source material so had a running train and some swinging lights moving from the vibration as it passed. The scene was rendered in Evee and Cycles then blended together to give some deeper colours and reflections. 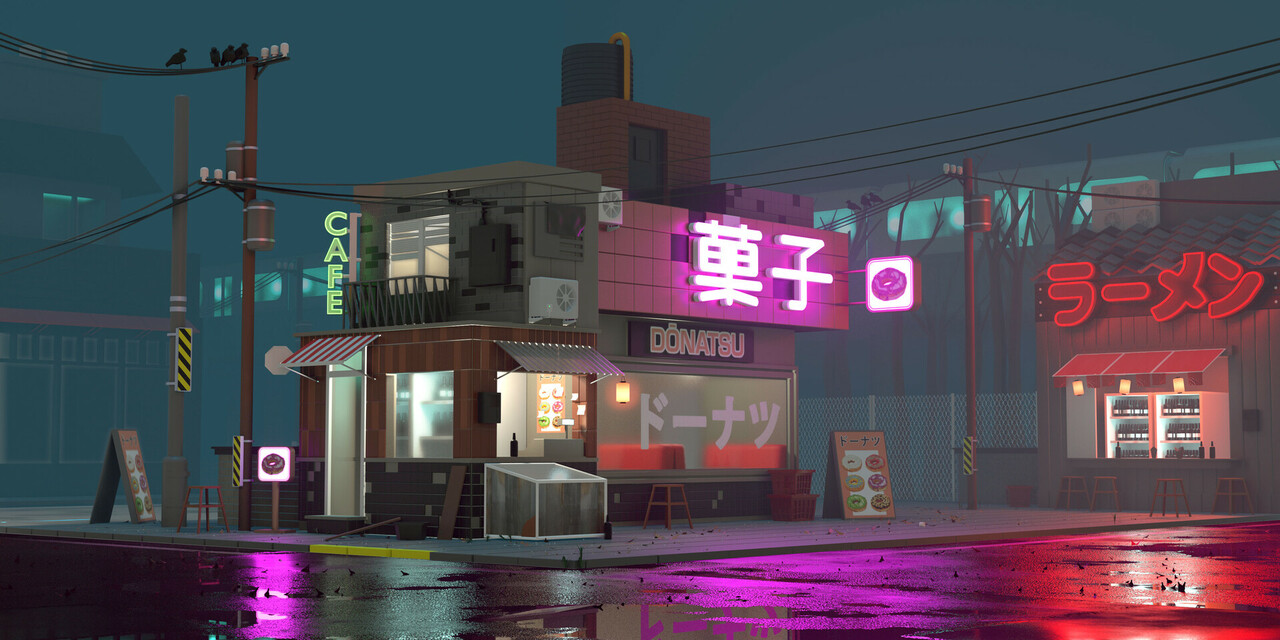 Here is my final animation in 4k:

The second week was to learn how to model wheels and tire tread patterns and mechanical guts. Using SubD for fenders, body panels, Shrinkwrap + Bevel modifiers. The target for this weeks class was a vintage tractor. Given that one of the brands I work for is Volvo Construction I thought about finding a good 1940-50’s tractor. Before VCE was formed Bolinder Munktell was the brand I found an odd little fellow called the BM-10 with a veryunique and narrow profile...perfect! 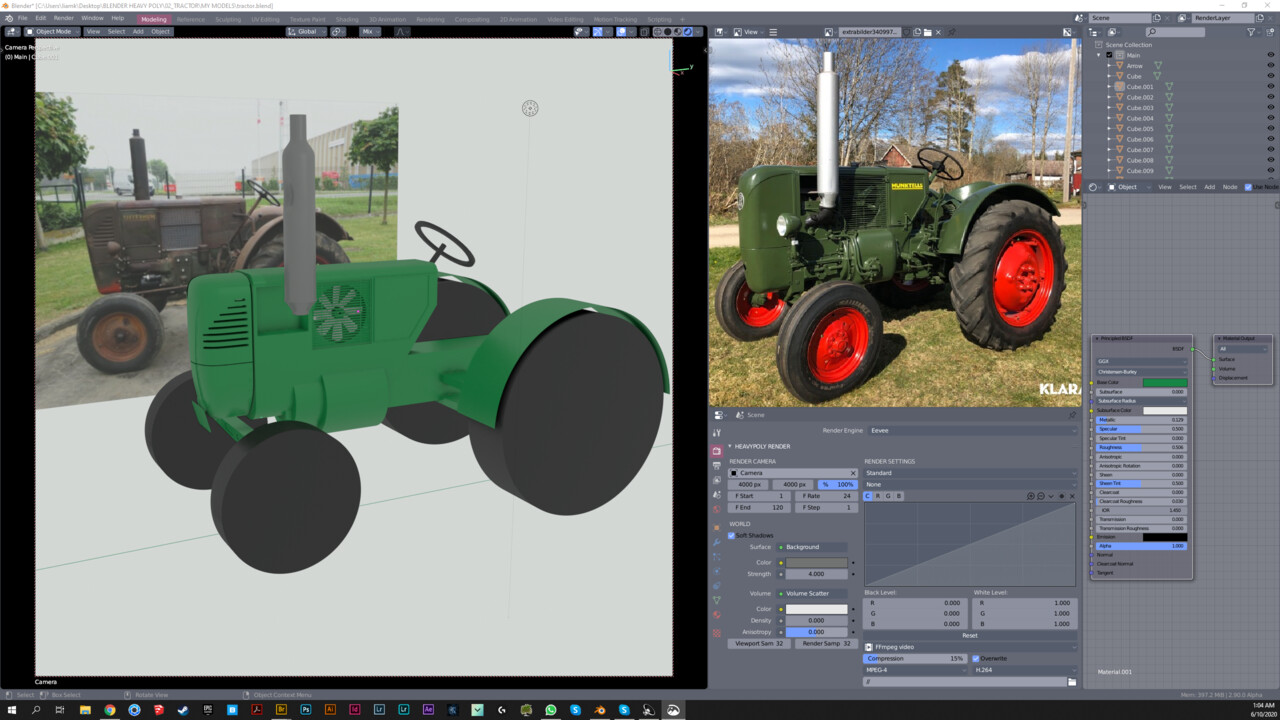 I managed to find a lot of good reference images for the tractor. 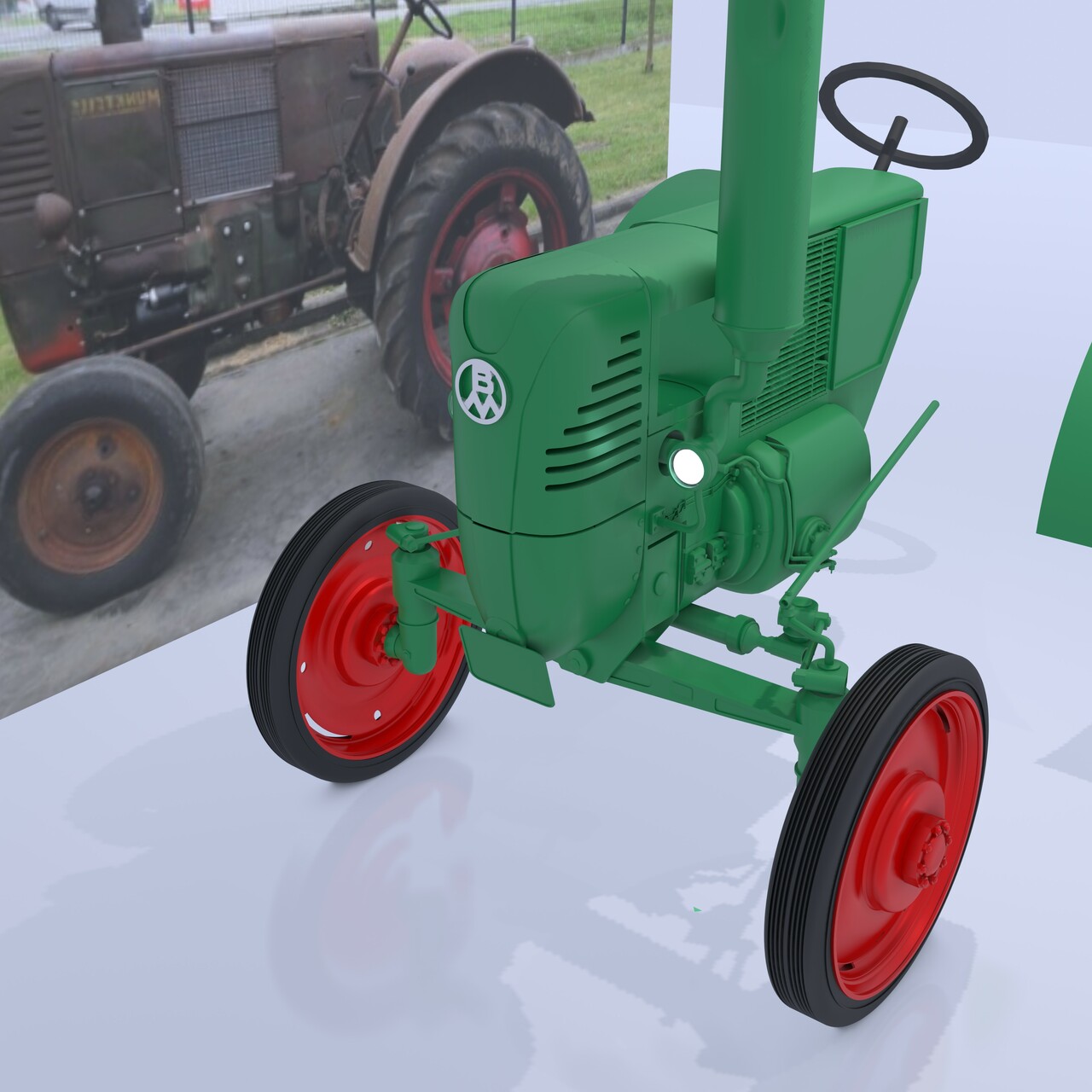 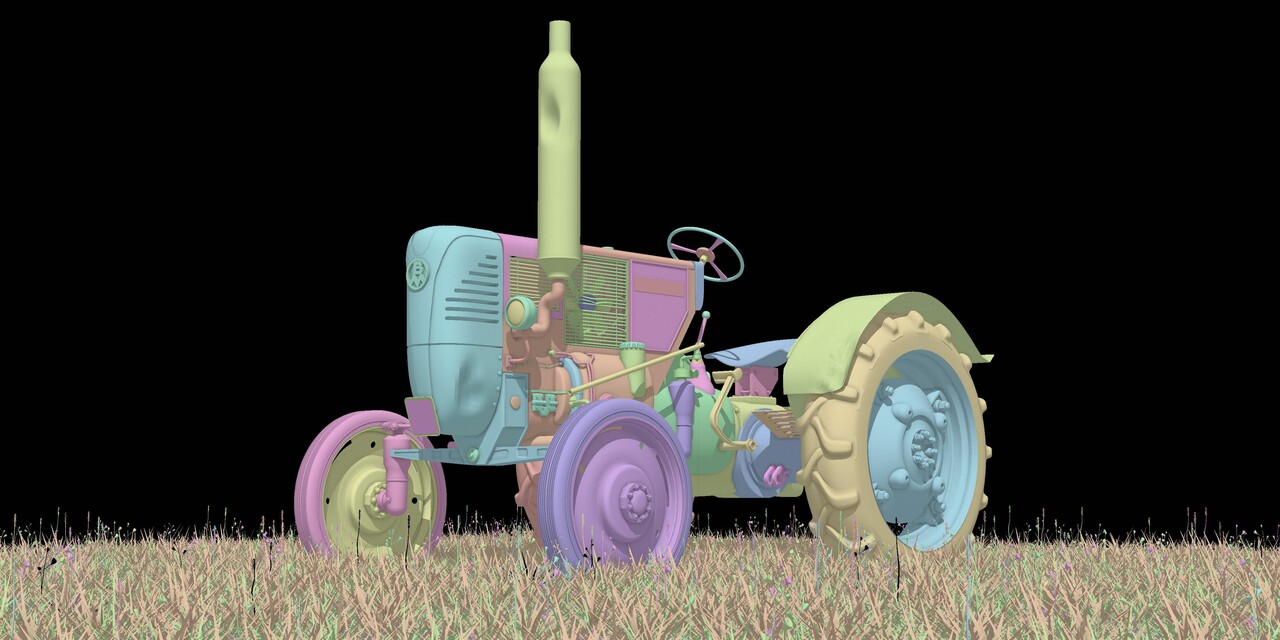 For the final piece I decided to make a false Tamiya kit box illustration. This was a direct render from the Evee render engine with no Photoshop corrections or additions. 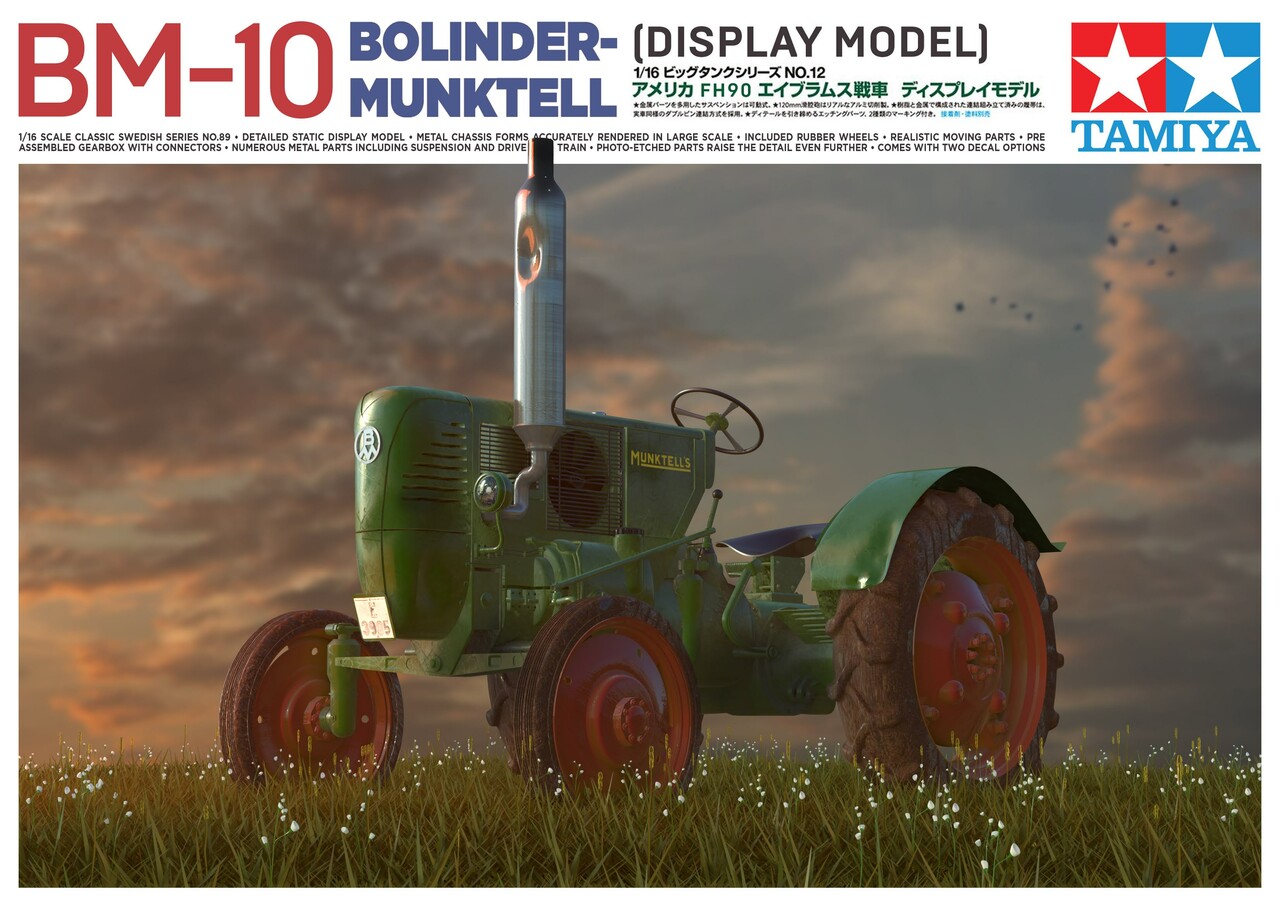 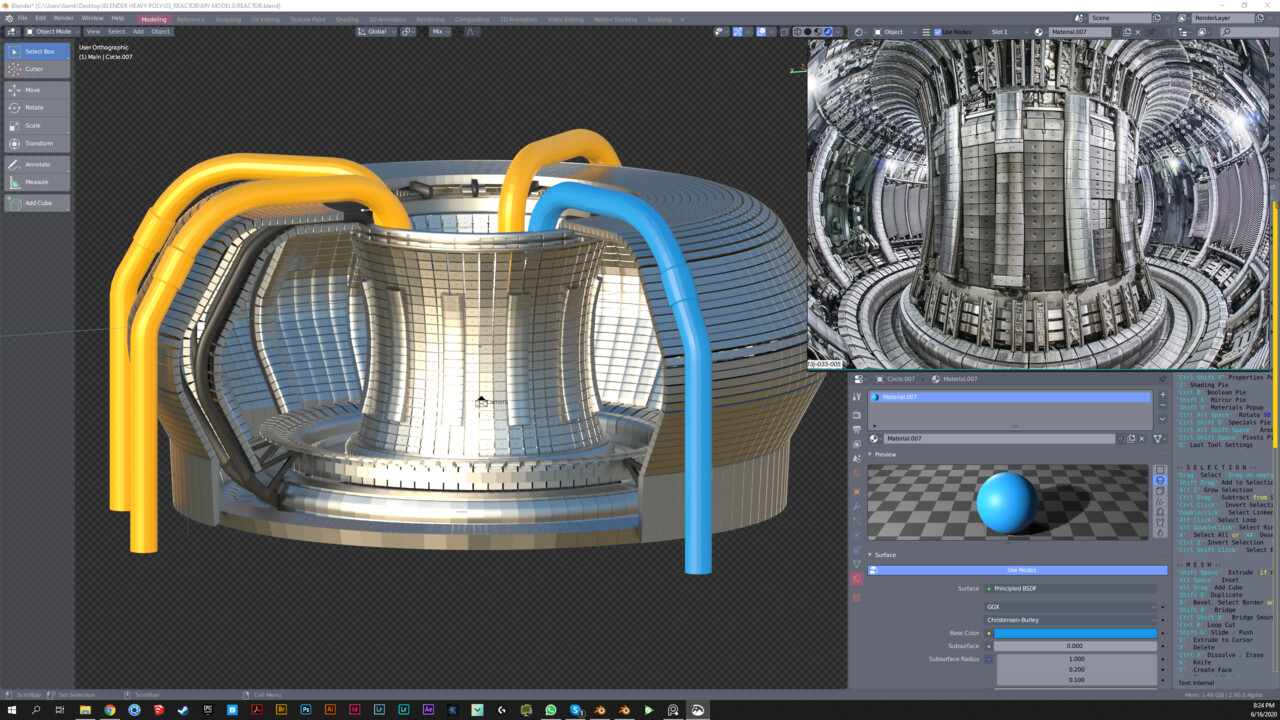 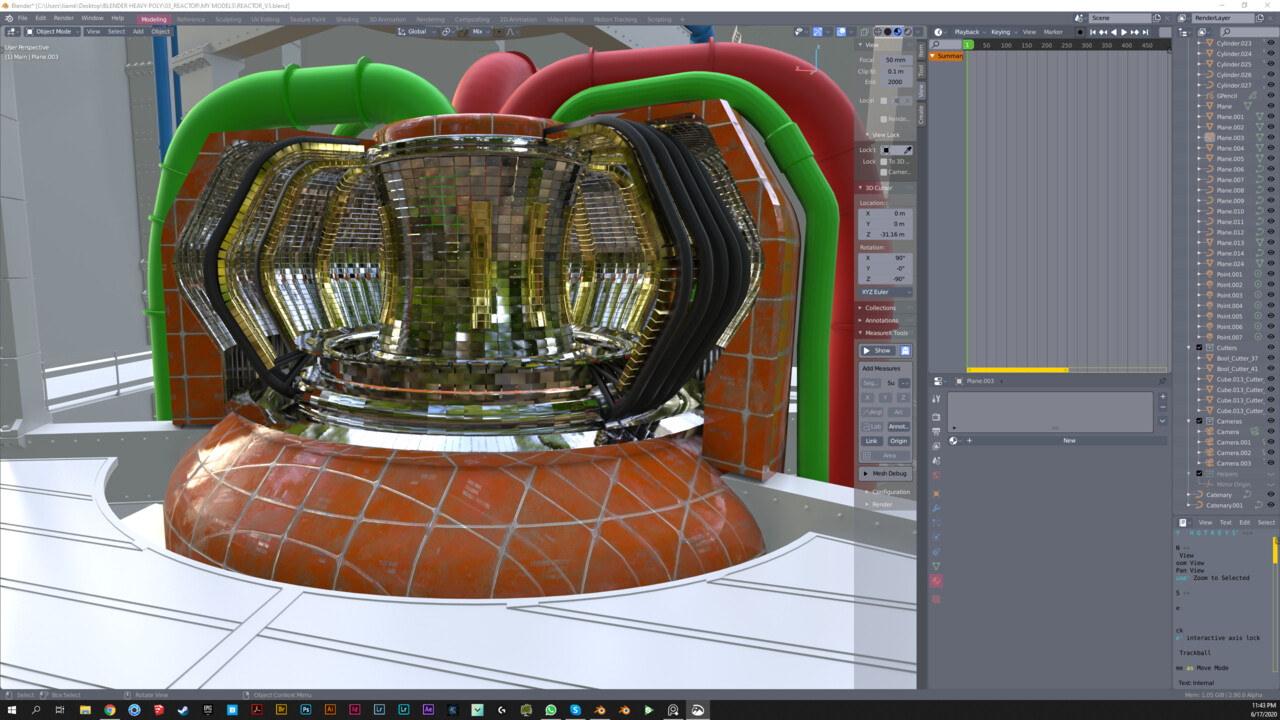 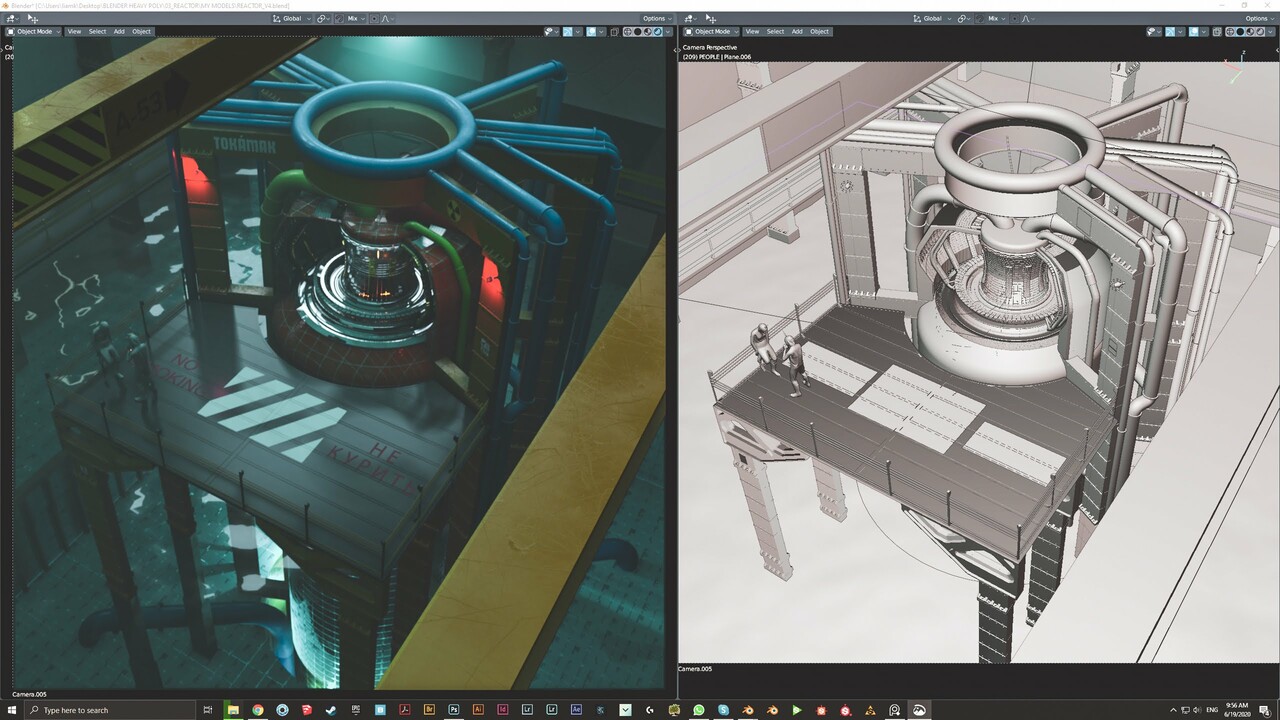 This week saw us use Blender’s particle system to create an animated school of fish with AI. Using procedural textures to create an infinite variety of landscapes very quickly and volumetric underwater lighting.

I wanted to push this week as far as possible so I first decided to cut a few David Attenborough clips together to make a short narrative (originally three minutes), this gave me the storyboard to follow and make animation easier.

The basic premise was that I would have a small submarine descending an Ocean trench, to then come upon a school of squid. 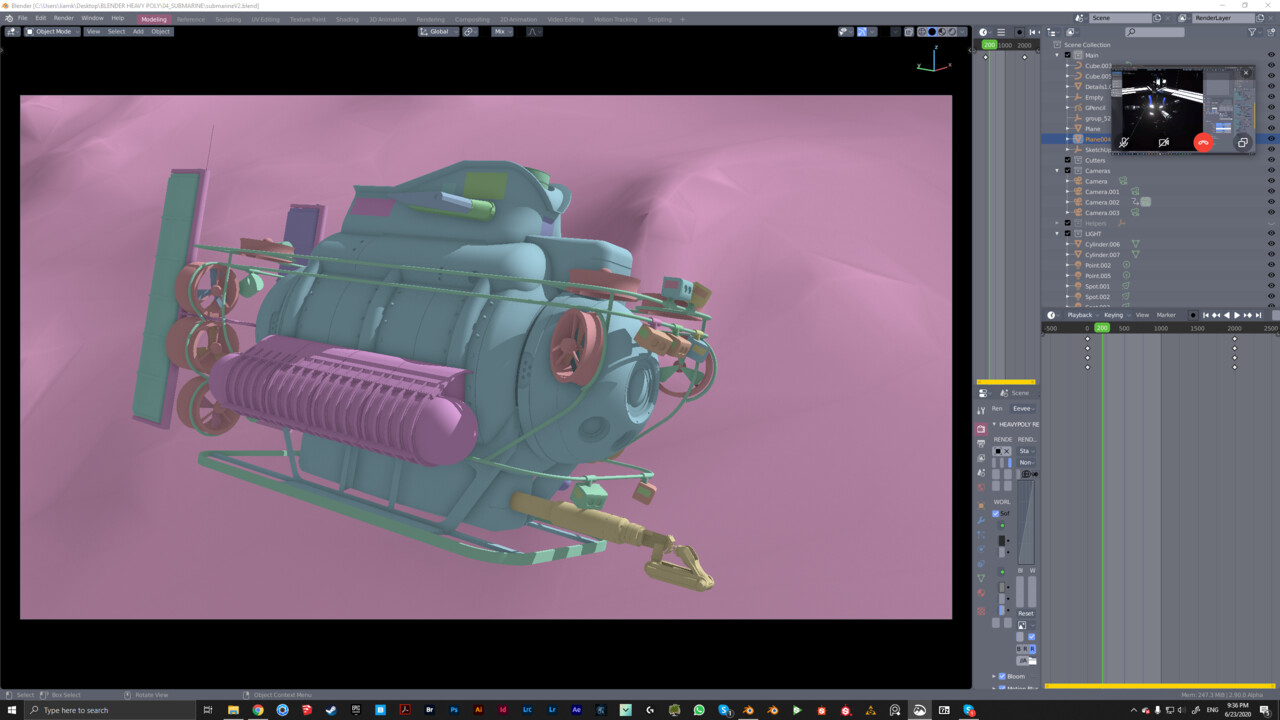 designed and rigged a small submarine to be the hero of the short, this was the quickest part of the process coming in at about a day and a half. I was struggling at first with the large animation splines, but then I realised I could just keep the submarine static and make the scenery more around it instead, much easier to work with the volumetric lights this way. 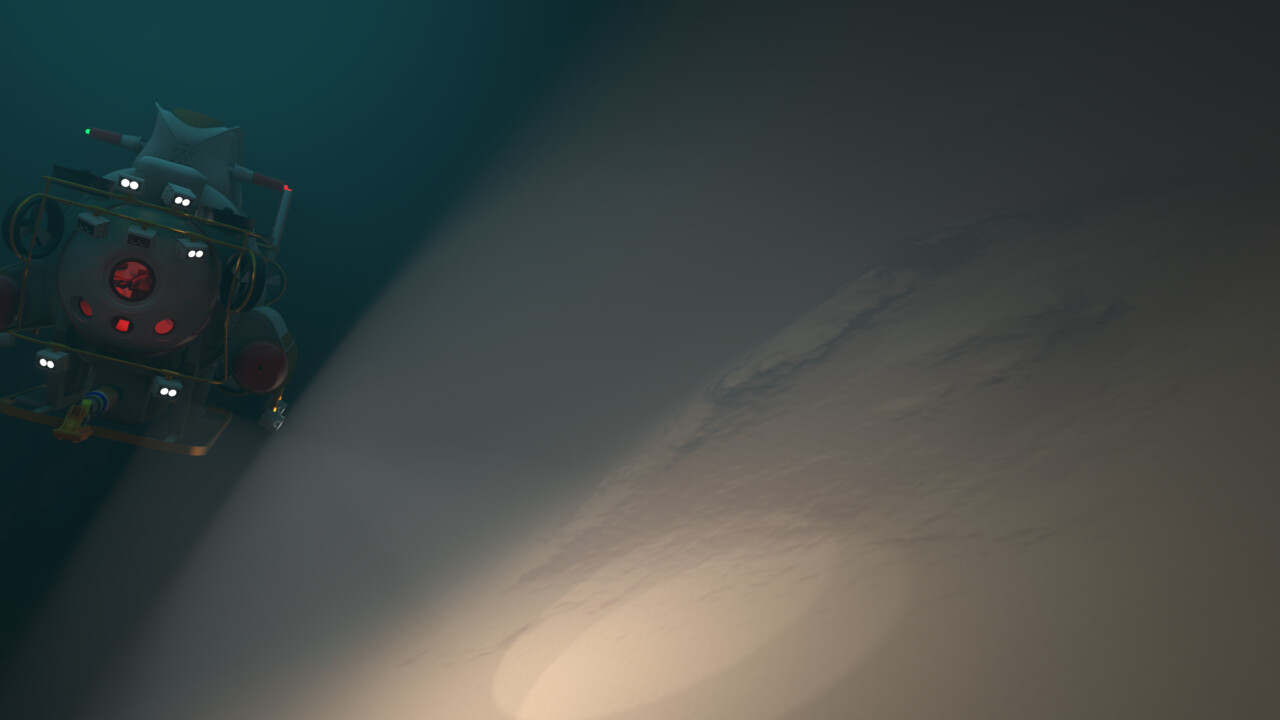 The squid were made with an SBS material to give an almost translucent effect to the outer edges, getting the swarming behavior right is certainly what took the longest. 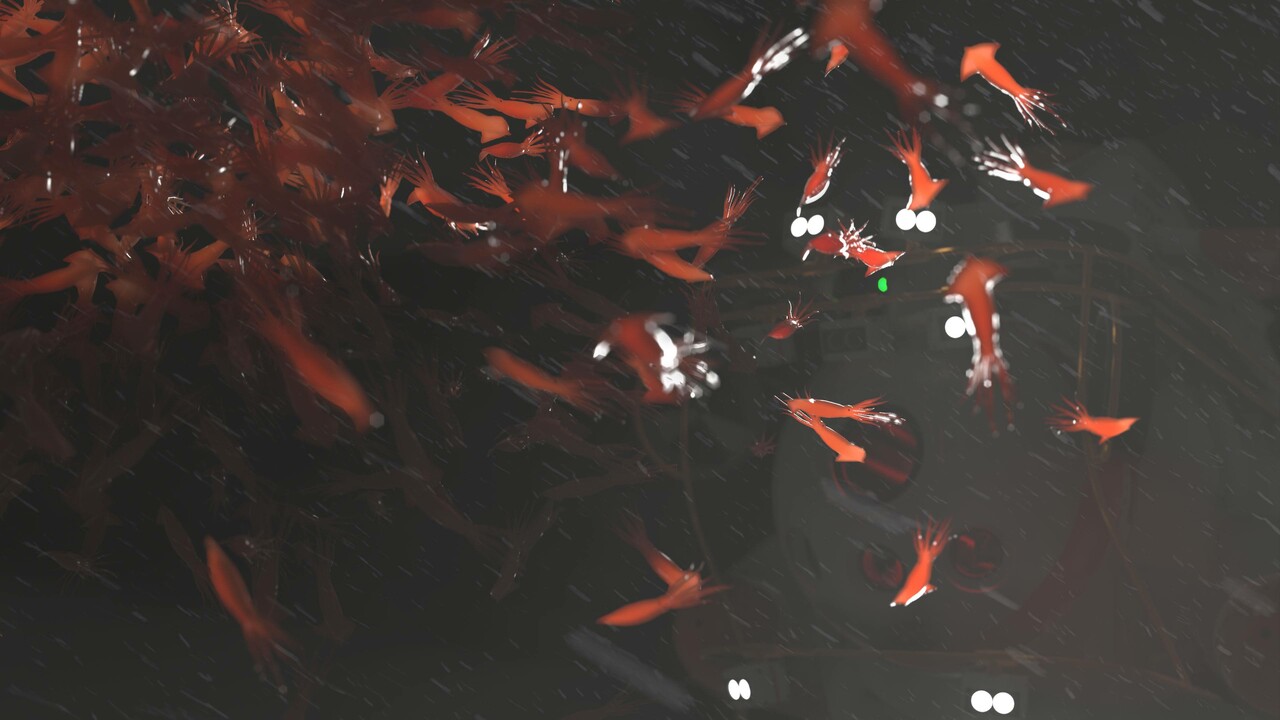 The final result is certainly something I was very pleased with after only my fourth week, here is the animation in 4K:

Week 5 was to create a menacing Kaiju monster. We revisited our scenes from the first week and added in some slimy beasts and destruction. I decided on some Sushi revenge creating my own leathery scale SBS material for the Octopus and tentacle skin. 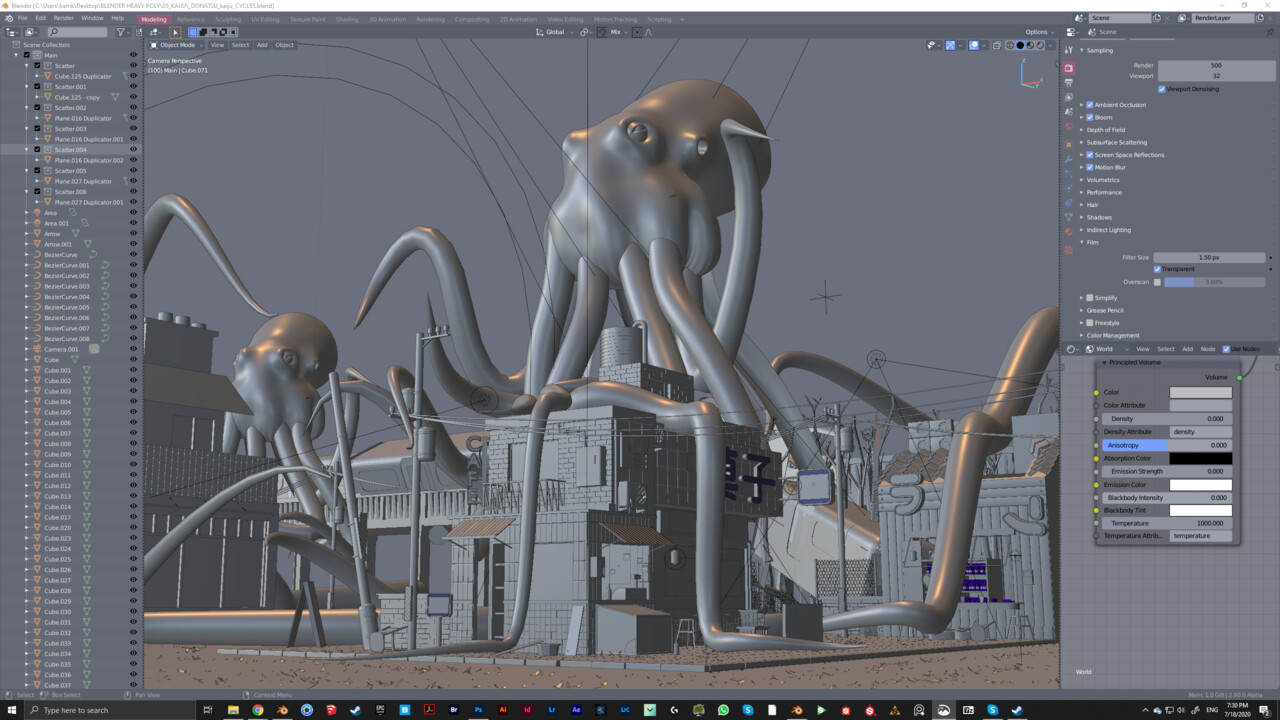 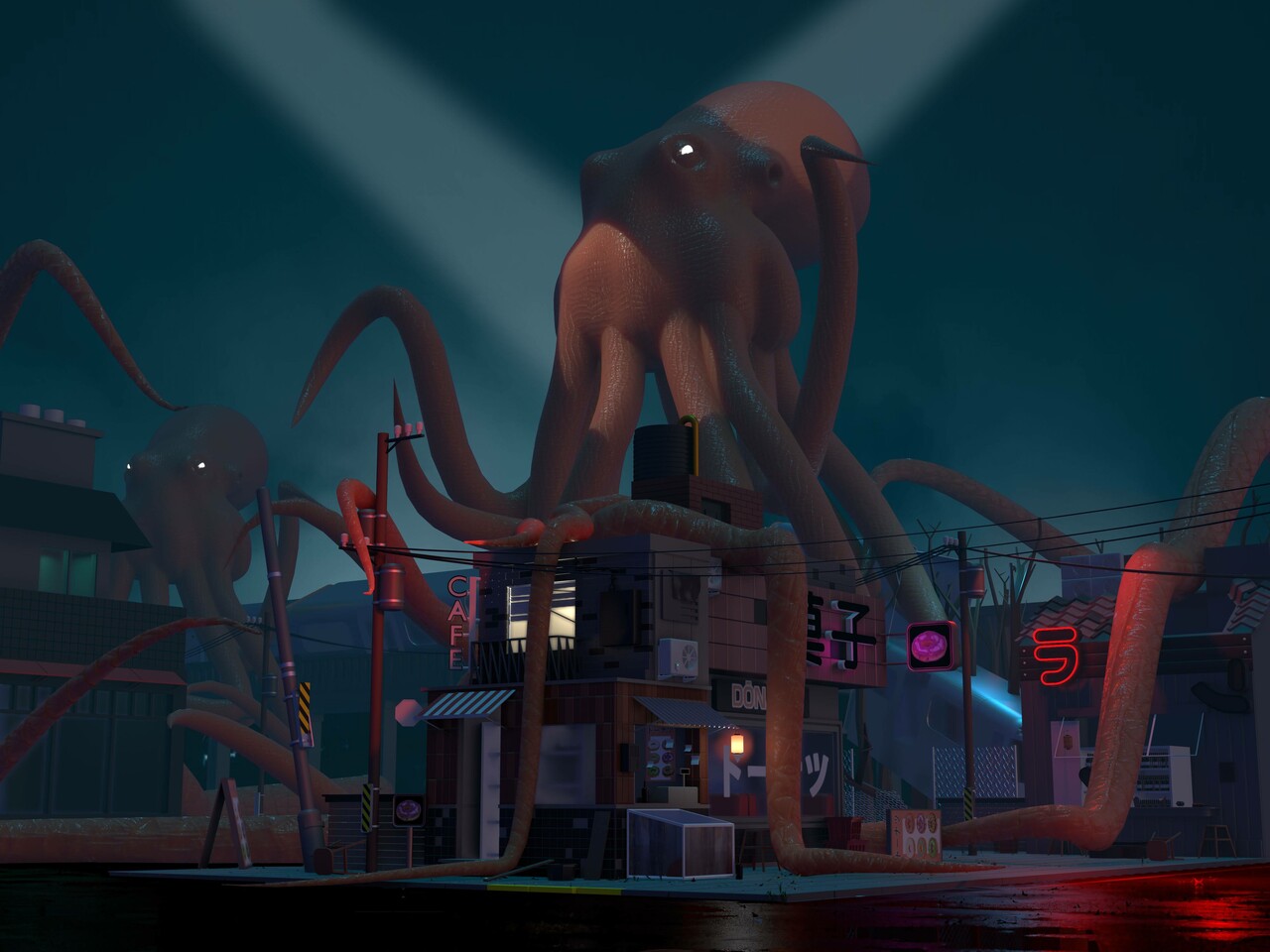 The sixth week, the one I was looking forward to the most was to create a mech inspired by the kitbash aesthetic of Maschinen Krieger. Using procedural Rust and Dirt Textures and PBR materials to take the quality up a few notches. 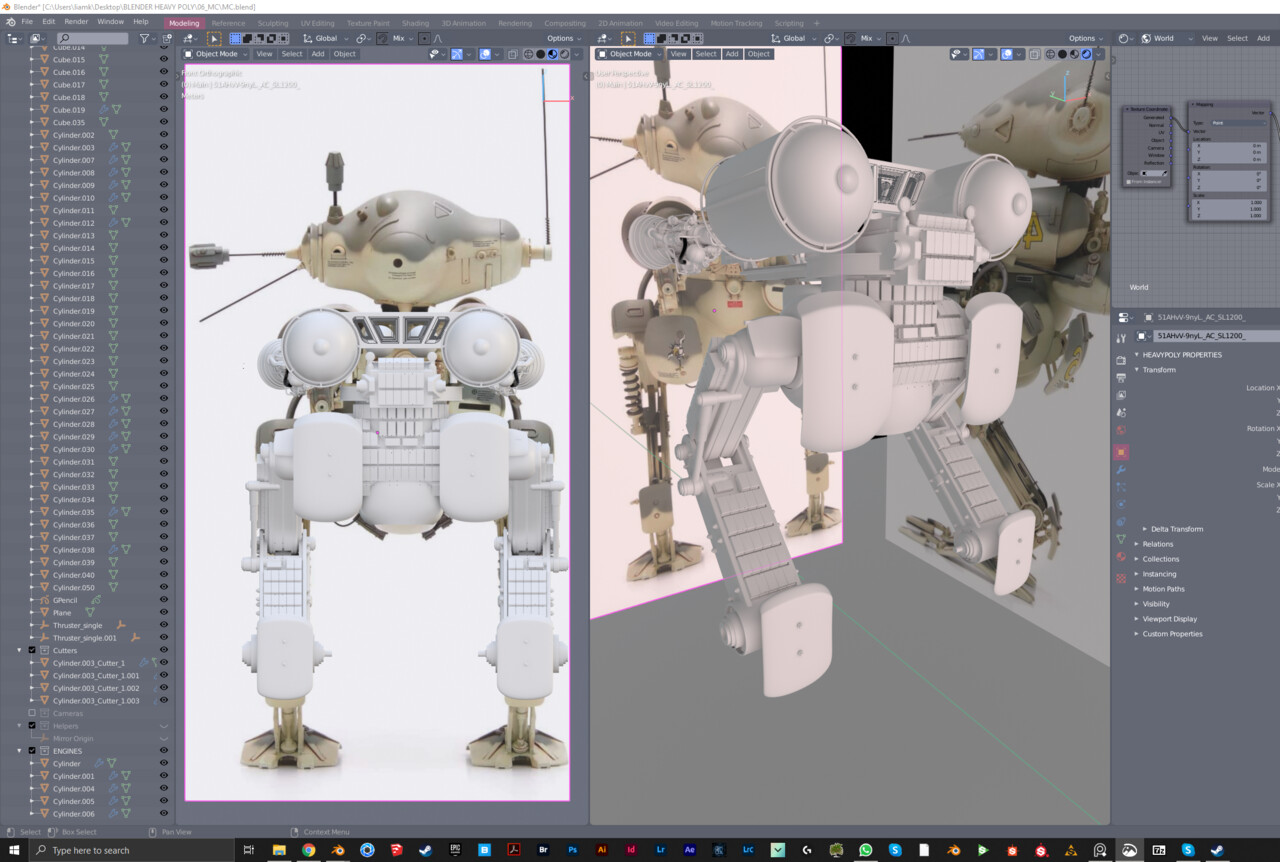 I decided early on that I wanted a 70-80’s Soviet athletic and that I was going to make a small tabletop diorama for added impact. 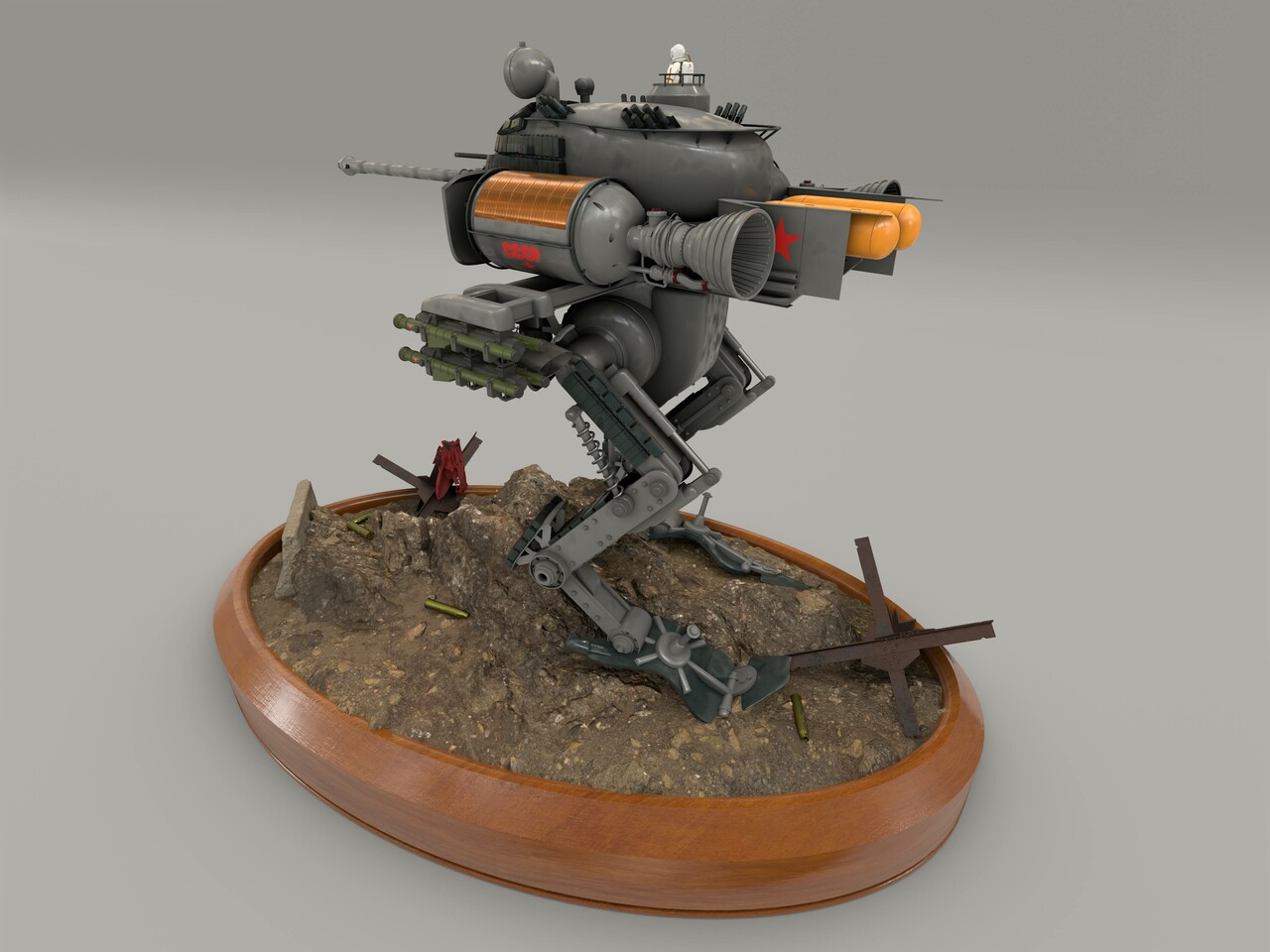 I created a desk environment with custom plastic kit type parts for the final diorama. 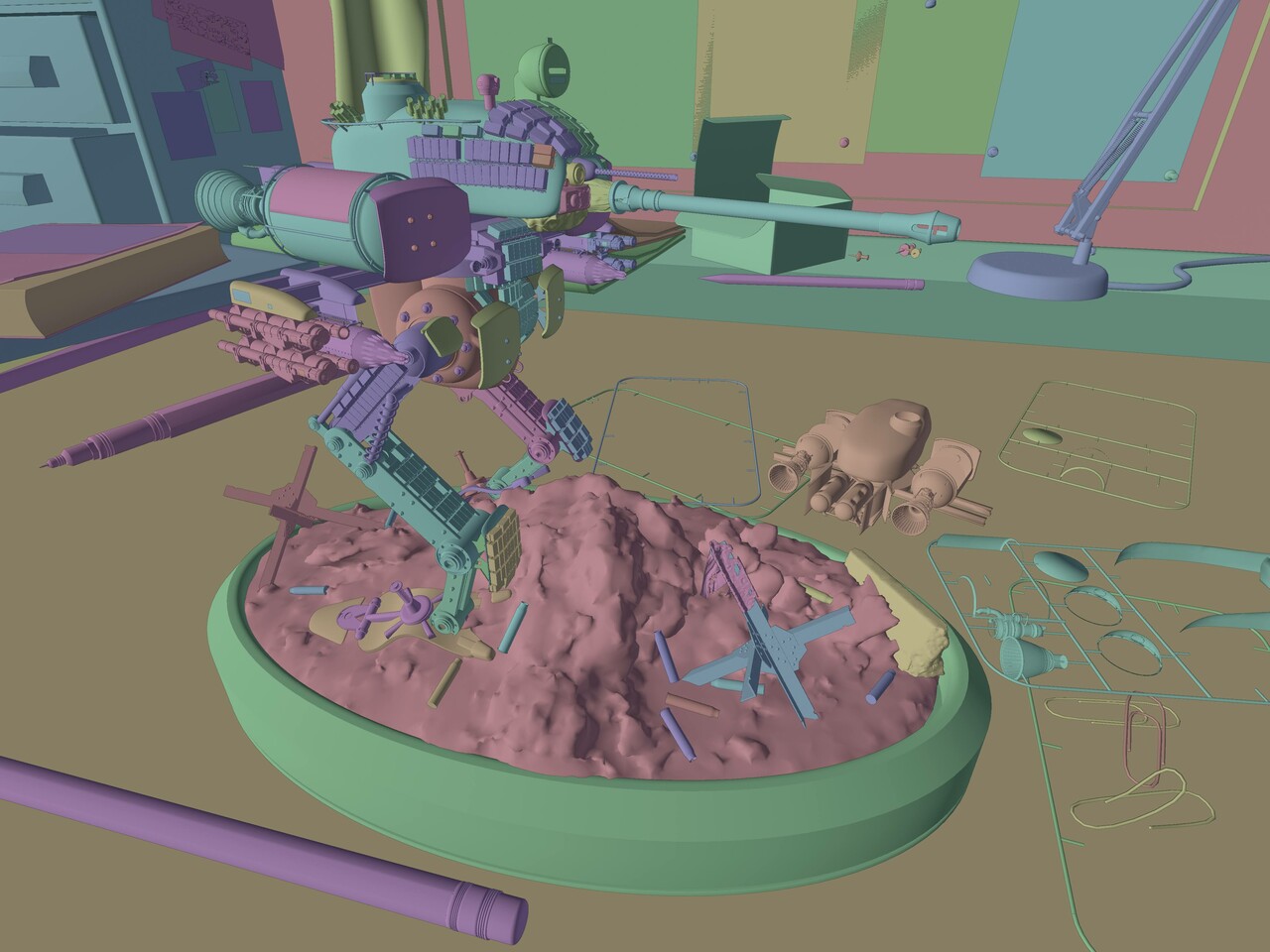 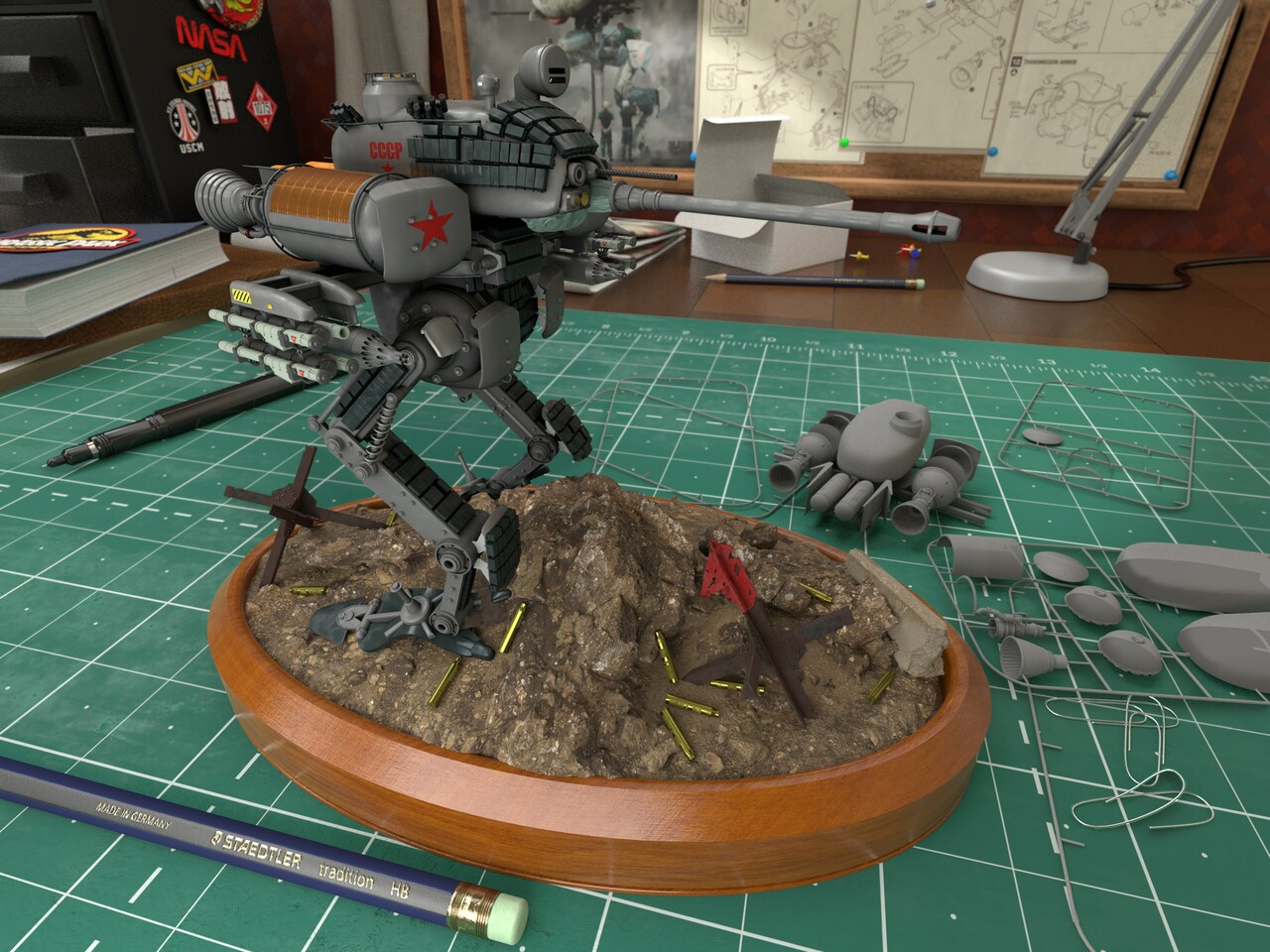 The final week had us create a Jaguar using SubD. However, Polestar had an open competition to design some sort of 2040 car. I decided to change the homework that week and see what I could muster from all that I had learnt so far.

I decided to go with some sort of rideshare Hyperloop Pod. It can be summoned to any urban location but transits long distances via a network of smart roads and low pressure hyperloop systems. 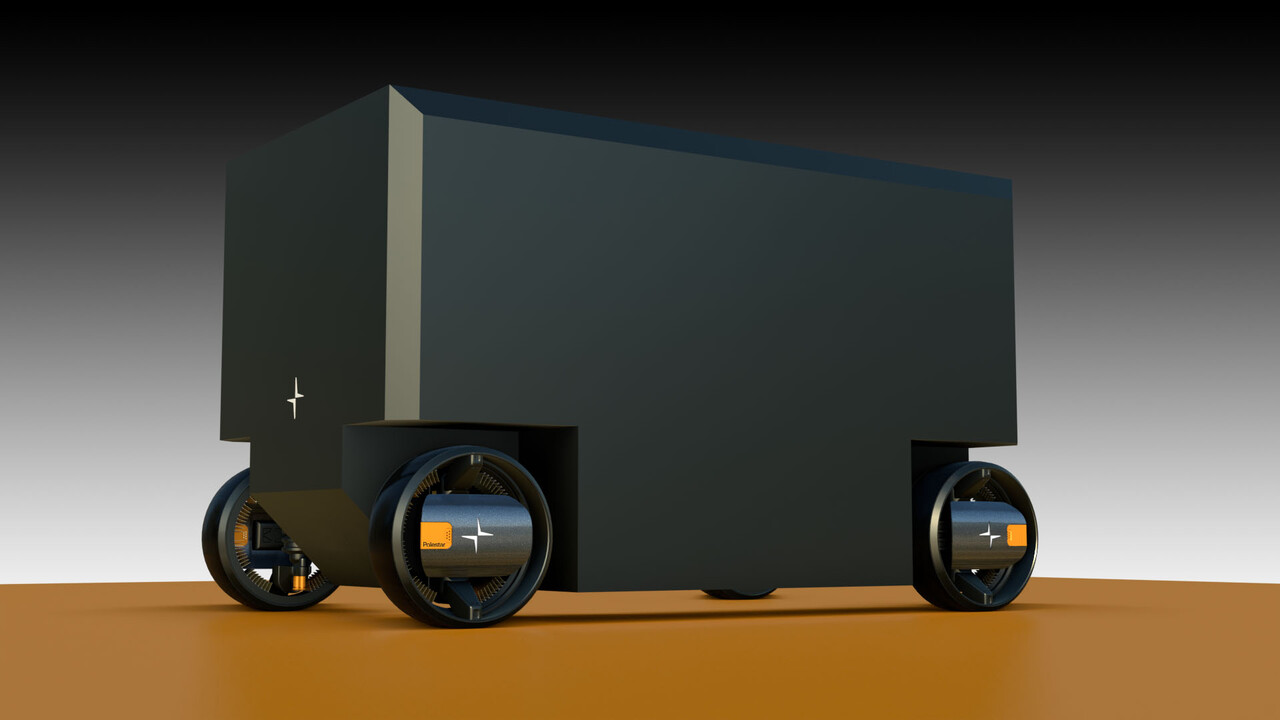 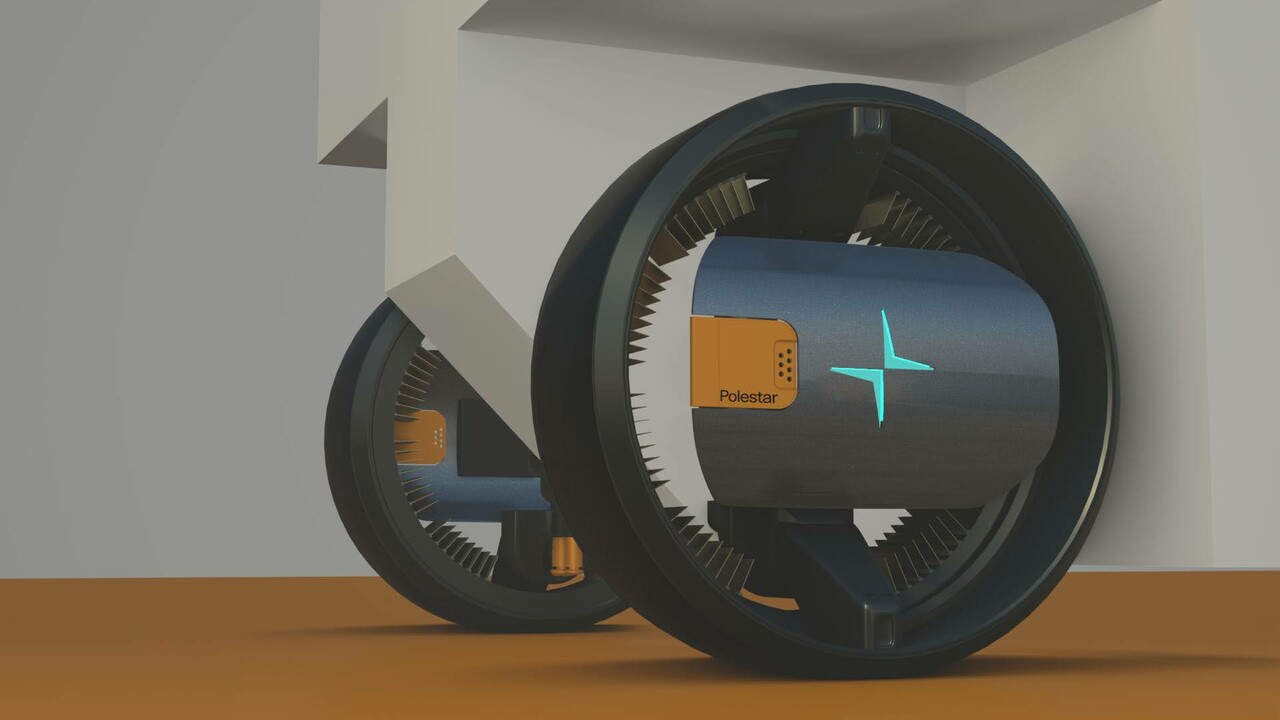 I was inspired by the ride shares in the final season of Westworld and also a lot of contemporary scifi vehicles from the likes of Mike Hill and Andrian Luchian. 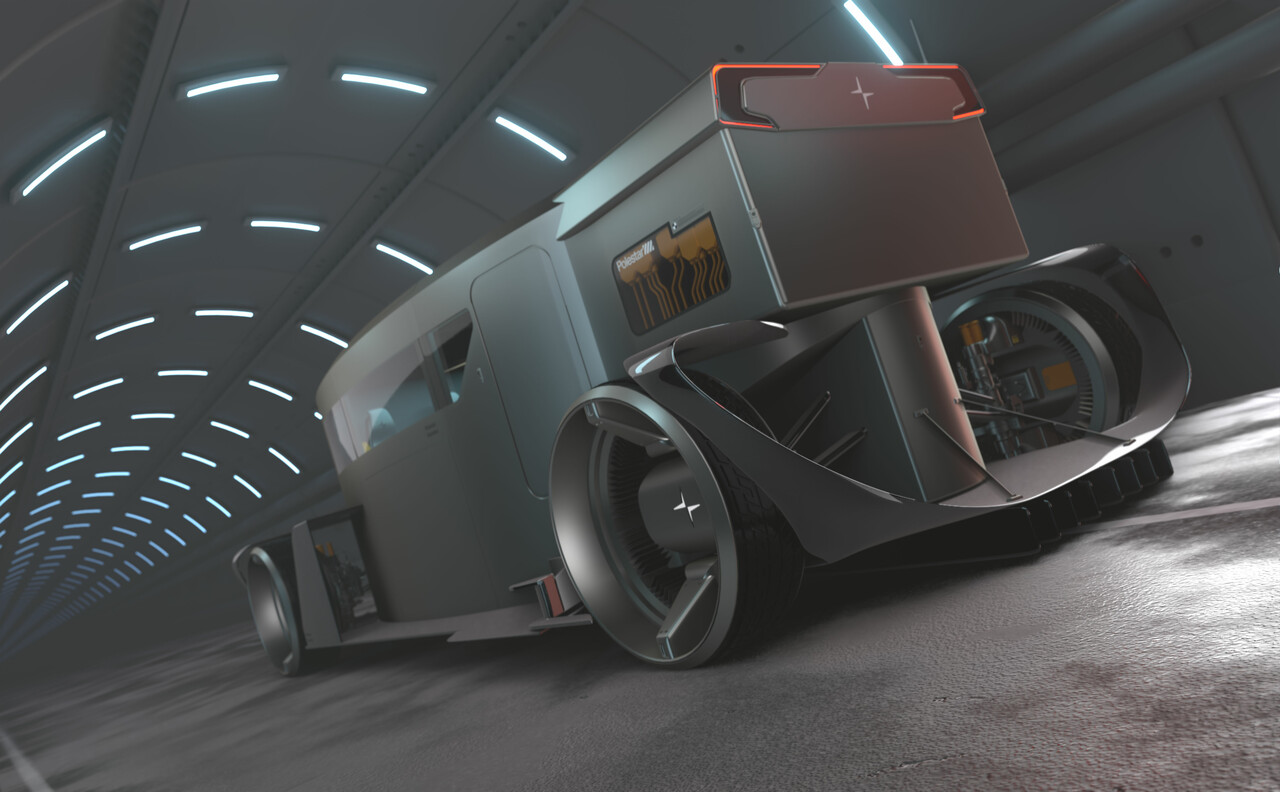 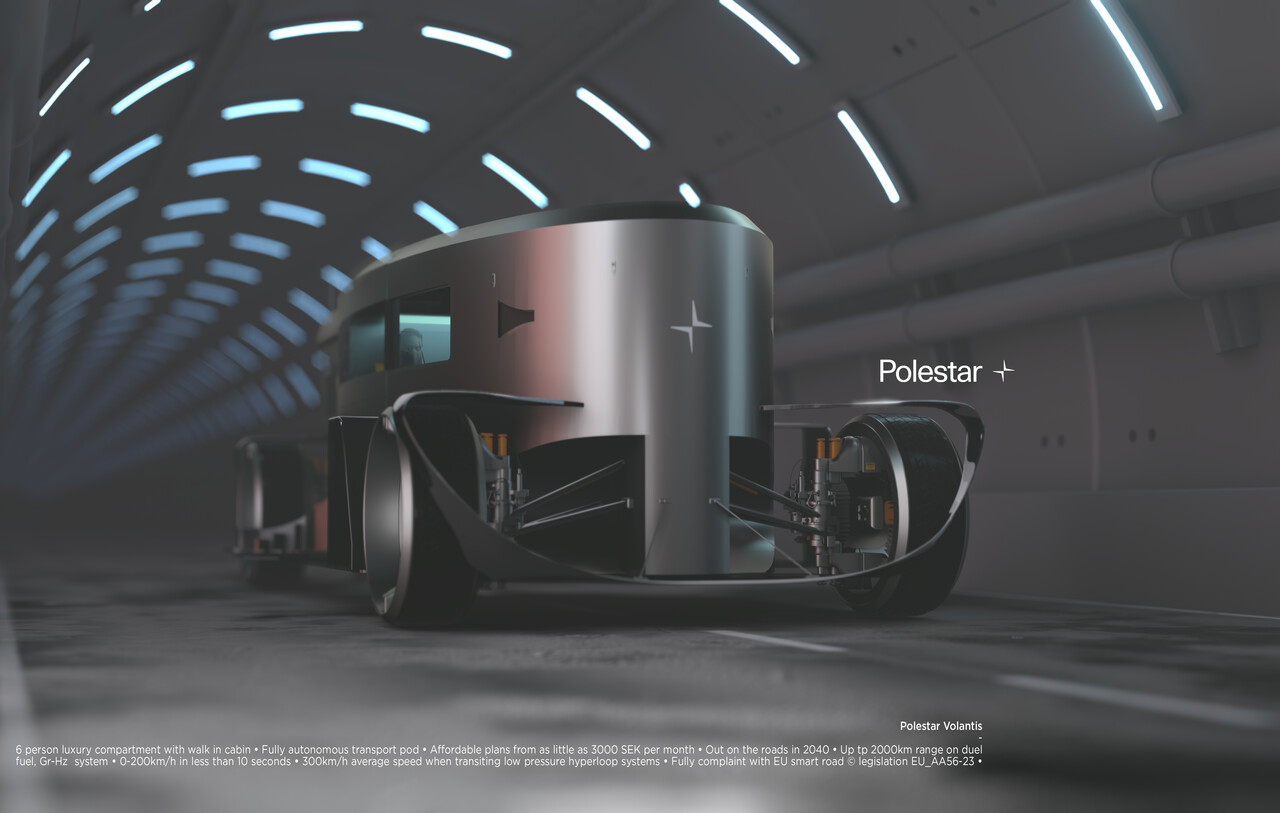 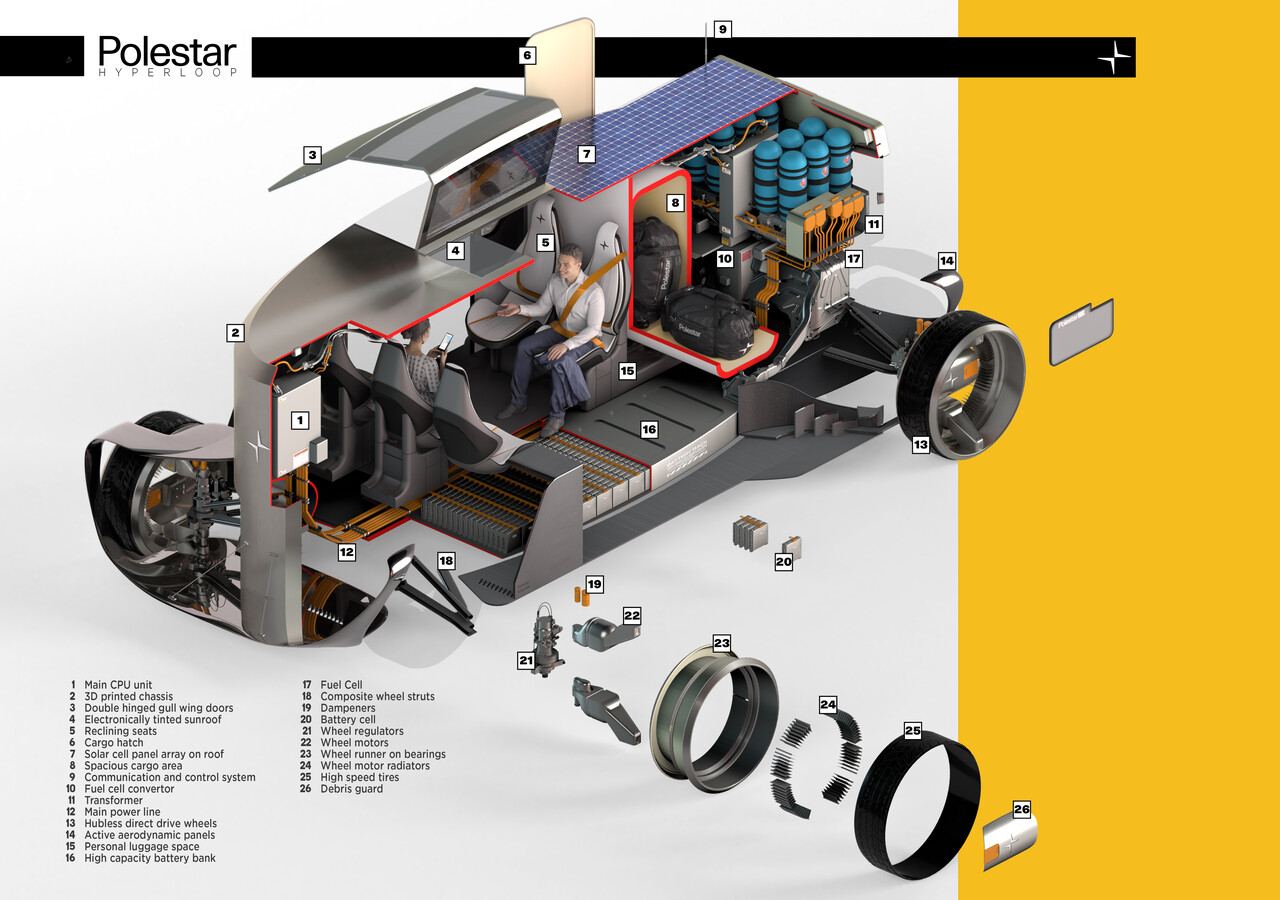 Well that’s about my wrap on the past 8 weeks. I really enjoyed it and can not recommend the course enough if you have very little to no knowledge of Blender but want to get up and running asap.

If you want to see more of my work you can find me on instagram here as well as my website: www.robotsvdinosaurs.com